Are Dreams Sweet or a Fool’s Game?

There, I’ve said it. Many who know me are probably not surprised by this confession but I’ve had a hard time embracing the name. It often comes with many negative connotations; being out of touch with reality, being naive, being the fool, are but a few.

I’ve been laughed at, mocked and lectured by well-meaning loved ones who said I was too sensitive and too much like my Grandmother. She was a big dreamer too. Unfortunately, she encountered obstacles in her life that kept her from achieving her dreams so she turned to her children and grandchildren to fulfill her and her dreams.

As her Grandchild, she always encouraged any of my hairbrained schemes and dreams. It meant the world to me that she believed in me when no one else seemed to. She’s long since passed now but I always hold her close in my heart. Now at 55, having lived over half a century, I can tell you I’m still a dreamer and I never intend on changing. I’ve seen too many dreams come true for myself.

The funny thing about dreams is, you have to be open to how they show up. They very often don’t look like what you thought they would or happen in the time you planned but they always turn out in the way and time that’s best for you.

When I was young, I thought I wanted stardom. Many of us are taken in by the glamour and illusions of fame. I know now, as an adult, that that lifestyle would have been the death of me. The pressures, stress, uncertainty, insincerity and disappointment that come along with fame are not things I would’ve handled well.  I would’ve died from a drug and alcohol overdose for sure. I’ve had enough struggles with these vices living a ‘normal’ life. 😉

As a teenager, I was crazy for the movie version of the rock opera ‘Jesus Christ Superstar’. I knew the whole movie by heart, every word to every song. I’d fall asleep many nights listening to the soundtrack on headphones.

I wanted to create my own version of the movie with all my friends. (Keep in mind, waaaaaay back then, we didn’t have the technology we do now. No videos, video cameras, computers, none of that. We would’ve had to of done it all ‘old-school’.) That was the first time I was called a dreamer by someone. That was also the time the song ‘Dreamer‘ by Supertramp was popular and I knew he hadn’t meant it as a compliment.

Well, my movie was never made but, at age 40, I auditioned for and got the part of Mary Magdalene in The Northumberland Player’s version of ‘JC Superstar’. It was such an amazing experience; one of the highlights of my life. And I can thank my being a naive dreamer for landing the part because if I’d known the reality of the talent I was up against in that audition, the many odds against me landing that role, I would’ve never tried. 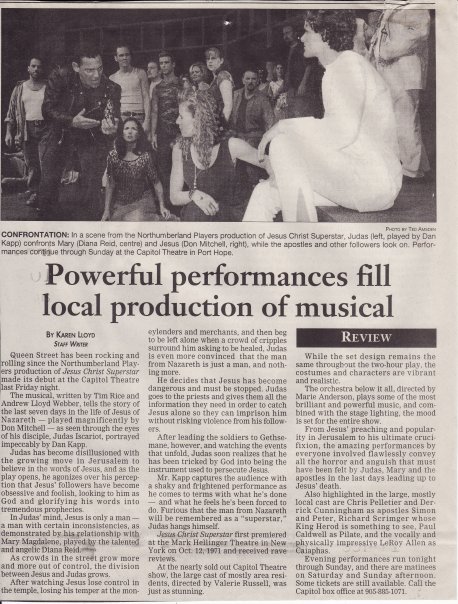 I’ve purposely gone in blind and naive when venturing towards many of my dreams, as I’d known the ‘reality’ would have scared me to death. My tactic, say yes before you have a chance to think too much. If you really want it, don’t wait for all the facts, take a deep breath and jump! That was how I accomplished things.

In my early twenties, I decided I wanted to be a singer. I was laughed at. One friend told me, some people are just meant to enjoy music, not make it. 😦 Someone else said, “Why do people always want to do something they’re not good at?” Ouch, to both, right? But did it stop me? No!

I joined a band and we wrote and recorded our own songs. I wrote the lyrics and vocal melodies and it was an amazing experience. I still have the recordings.

After my theater experience, I also had some fun years as a professional singer with a vintage rock band, a folk duo and a jazz trio. :p

In my early thirties, I used to watch ‘Neon Rider’, a Vancouver-based tv show about a recovering addict who had a ranch where he helped inner city ‘at risk’ youth. I was working at an animal shelter at the time and I dreamt about owning a place where I could rescue animals and help troubled teens.

When I met my second husband he had similar dreams. We weren’t sure how we were going to do it. We didn’t have the money to buy the property we thought we needed to support this dream. But as things turn out, it wasn’t long after we were approached and recruited to become foster parents. We started fostering teenager girls. We also adopted shelter animals as family pets and eventually started an exotic bird sanctuary. Those years were tough as hell, heart-wrenching and amazing all at once. I wouldn’t have traded the experience for the world. I made so many mistakes and learned so much about myself and others.

Those are only a couple examples of how my dreams have manifested for me. No, I never became rich and famous like I thought I’d wanted to as a child, thank Goddess, but anything my heart truly wanted, came to me in one form or another.

Now my dream is to be part of the ‘Rainbow Warriors‘ who’ll help save the planet and humanity. My way of doing this is through my ‘Wild Child’ business. I want to support others in finding their truth, their courage and their dreams. I dream of reconnecting more women to Mother Earth and rising with a global community to protect Her, and our future.

I don’t know how this will all play out. But I’ll keep, showing up to do what calls me each day and staying open to the possibilities.

Because I’m a ‘Dreamer’ and I know for fact that, dreams do come true.

I’d love to connect with you.

If you have any questions, are interested in workshops or coaching, wish to collaborate in any way or would simply like to connect,

2 thoughts on “Are Dreams Sweet or a Fool’s Game?”

This site uses Akismet to reduce spam. Learn how your comment data is processed.